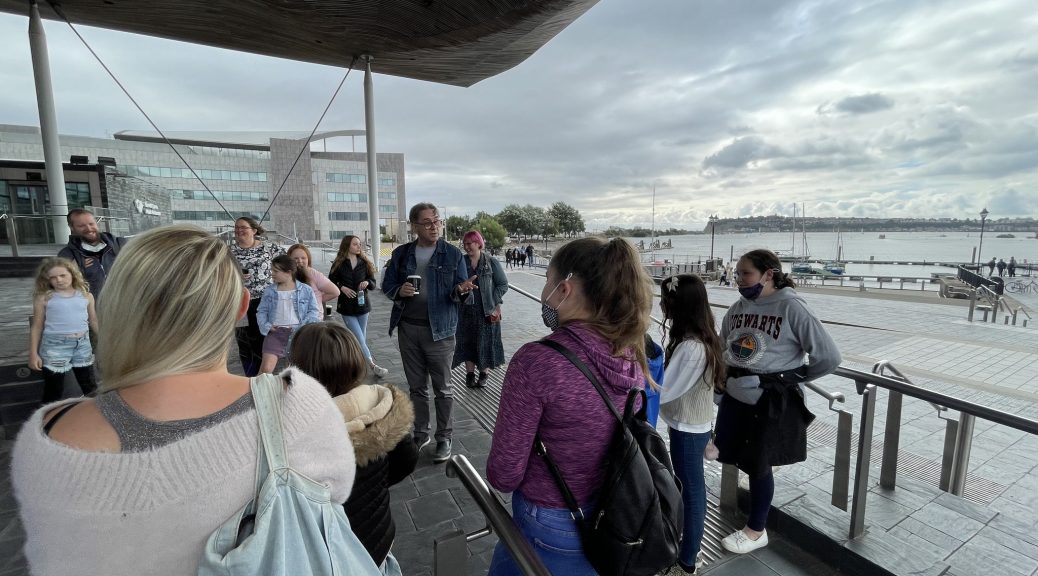 Over the past two and a half years, young people in Pontypridd have been the trailblazers in a European project aimed at finding ways to promote youth dialogue with politicians and policy makers around circular economy. The Youth Forums are expected to produce local action plans with visible results and have already lead to a number of new circular initiatives being implemented.

As the funding for the Erasmus+ CEYOU project comes to an end, here’s a round up of the activities so far…

As part of the CEYOU project a process to form a Youth Forum on circular economy  started in summer 2020 in Pontypridd, Wales. The activities, coordinated by CEYOU  coordinating partner Pontydygsu Ltd, consisted of a series of online and face to face events involving young people, youth organisations and local elected representatives. The aim of the Forum is to develop an action plan on circular economy and then to carry out those actions. The target audience were young people, (members of Young Friends of the Earth Pontypridd, representatives from local schools, and members of groups such as Girl guides) as well as local representatives from the UK Government, Welsh Assembly and local council. The core group of young people were  already part of an activist group who had been organising and participating in the local  school strikes for Climate action; they had also already participated in a hustings with local  potential candidates for parliament. They were and are still keen to continue their activities.

In July 2020 One week prior to a planned forum with policy makers, Pontydygsu organised a zoom meeting for the young people and their parents. A short introduction video was filmed by one of  the young people to explain what the group was going to do and a dedicated page on the  CEYOU site was created to share information about the forum. These links were shared with  the families of the young people via a facebook messenger group. The young participants  were asked to think up some questions to inform the plan for the forum. During this initial  planning meeting, the young people created a wish-list of all of the questions and possible  activities they could think of for circular economy and environmental activism in Pontypridd ready to present and discuss with the politicians in the full forum.

Session 2 consisted in a round table discussion and workshop with local politicians. The Member of Parliament for Pontypridd, Member of the Senedd for Pontypridd and a Town councillor for Pontypridd were contacted by email and sent  information about the project and the forums. All agreed that they wished to be involved in the activities and the date for a forum was set for 22 July.

Young FOE presented their ideas for discussion and asked questions of their representatives and then the whole group worked together to agree an action plan with responsibilities assigned to different people.

The main areas of work identified during the forum were the following:

Circular economy initiatives such as clothes and uniform recycling, and increased collection points for difficult to recycle items;

Training and learning opportunities such as mentoring for young activists, cycling skills, and upcycling;

Awareness raising campaigns such as walking, cycling and preventing littering from PPE.

The Action Plan reports the list of activities part of the action plan developed during  the meeting, as well as the actors responsible for each activity and a deadline for the  implementation. The action plan has been disseminated to all participants, also to the wider local friends of the earth group and then publicly on the CEYOU website and social media.  The action plan can also be consulted online.

The group reconvened in October 2020 online to revisit the action plan, review progress  and agree next steps. For this meeting, more young people were invited to attend the forum  via local schools’ eco-councils and additional responsible adults where required.

The group went through the action plan developed in the previous meeting and reviewed  progress for each of the actions. Updates about the work of the group and the activities  developed are regularly posted on the CEYOU website.

Due to Covid-19 restrictions, several actions had to be delayed but the enthusiasm of  participants stayed high. Several new ideas were developed and added to the action plan.

New areas of work identified were schemes to award local ethical businesses and the need for public spaces to be designated as wild areas or as community growing spaces.

The new ideas are listed below:

An open communal garden space where people of all ages can meet at a distance and  garden together;

Stickers for shop fridges which either don’t work or are being left open;

Reduce or entirely get rid of plastic bags in local shops;

What happens to all of the empty hand sanitiser containers from shops and schools?  Can something better be done?

Can we do something about people dropping their disposable masks and gloves on the  floor?

To take forward the ideas discussed with Mick Antoniw MS around active transport and safe routes to school the group invited their local representatives and supporting adults to complete a cycle ride across Pontypridd. This proved to be near impossible as there is no safe cycle route across town and a number of the representatives are as yet unable to ride a bike. The group laid down the challenge for them to learn.

The group took part in some bike rides to highlight the difficulties and the positives encountered on their regular routes. The photos were shared on social media.

In follow-up, the group met with Pontypridd Town Councillor Simon Pritchard to discuss their concerns and to come up with a list of ways to improve cycling around Pontypridd.

Cycle routes could be made clearer, particularly in high traffic areas (Llanover roundabout, Broadway, the main road through Treforest)

Cycling Proficiency courses should be held in Ynysangharad Park with classes for adults as well as for young people.

Cycle maintenance courses could also be considered, in the park and in collaboration with Barry Sidings.

An awareness campaign should be launched to encourage cyclists and pedestrians to respect each other more and to promote transport which is not reliant on fossil fuels.

The group met during Pontypridd Green Week for an informal discussion with Heledd Fychan MS and Mick Antoniw MS. They quickly visited the outstanding points on the action plan and decided to work on their previously planned scheme to reward local businesses with ‘Youth Forum Approved’ Status.

Invitation to The Senedd

During The Great Big Green Week, the UK wide fringe festival for COP26 in  September 2021, Pontypridd Youth Forum were invited by Mick Antoniw MS to attend a meeting with him at the Pier Head Building in Cardiff Bay. The session started with a look at the Senedd building before moving to a round table discussion.

The Rights of the Taff

During Pontypridd’s own contribution to the COP26 fringe festival; Pontypridd Green Week, the youth forum and local residents contributed ideas for a ‘bill of rights’ for the river Taff as it flows through Pontypridd. The bill was read out and presented to Mick Antoniw MS.

Mr Antoniw noted that he liked the idea. The group then discussed ways to enforce the rights of the river and Mick outlined the stakeholders who would have to be consulted as well as the legal process to be followed.

One of the proposed rights of the Taff was for it to be kept free of litter. The group proposed more litter bins, easier access to litter picking tools and also ways of reducing packaging in the first place. Support for refill stations in smaller shops was suggested as well as launching a petition for bottle deposit-return schemes to be introduced.

Following a short discussion about the benefits of reintroducing Wolves and other native apex predators into Pontypridd, the conversation returned to the Taff. There are concerns around the high levels of poisonous metals, a remnant from the coal industry, which are finding their way into bird eggs and causing damage to hatchlings.

The group also noted that adherence to the proposed river rights and a reduction in both litter and pollution would benefit local biodiversity.

CEYOU may be drawing to a close but the forums set up across Europe will continue to meet, work on the action plan points and share new ideas in conversation with their elected representatives. The work done in Pontypridd contributes to guidelines for establishing permanent forums of dialogue between local authorities and youth organisations on Circular Economy. The Key recommendations of this report are as follows;

Based on the CEYOU project partners’ experience and research in setting up and facilitating Youth Forums, we are able to list some key recommendations. (Further details via the ‘More Info‘ button):