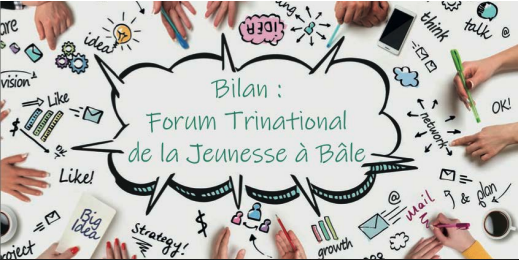 CEYOU partner Youth Express Network (Y-E-N) attended the Trinational Youth Forum (France, Germany, Switzerland) organised in the framework of the Upper Rhine Conference.
The forum consisted in two events, one on 15 February 2020 in Strasbourg, France, and one on 3 September 2020 in Basel, Switzerland, both called from the respective local authorities. The overall aim of the event was to give a voice to the young generation through cross-border cooperation.
A representative survey titled “Giving a voice to the young people of the Upper Rhine Region” was carried out among a panel of 1,403 young people aged 18 to 29. The purpose of the February 15 seminar was to present the results of the investigation. This seminar “From findings to the co-construction of shared ambitions” also allowed 30 young people from the 3 countries, elected decision-makers and youth workers to react on the conclusions of the survey, to share good practices and to propose concrete actions and initiatives on the identified themes (environment, mobility, participation of young people).
The second event in September was an opportunity for 60 young people to discuss their points of view and their concerns with their peers from France, Germany and Switzerland and to speak directly to representatives from politics and administrations of these 3 countries.

The Forum was called by the President of the State Council of the Canton of Basel-City, Elisabeth Ackermann, to discuss cross-border aspects in the fields of environment and climate, transport and mobility, as well as training and education. The participants presented their concerns to the politicians, among who were also the Regional Councilor for the Grand-Est region, Claudine Ganter, and the President of the Government of Karlsruhe, Sylvia M. Felder. “With this event, young people should be able to become more involved in trinational cooperation. Many are already using cross-border possibilities very naturally and thus have visions and concerns on this subject”, explained the President of the Council of State, referring to the representative survey of the Upper Rhine conference carried out in 2019 among young people.
Environment and climate, transport and mobility as well as education and training were at the center of discussions in the workshops and in the plenary assembly. Participants stressed the importance of a tri-national agreement on these issues in order to remove barriers from borders. They called on policy-makers to better take into account the views and concerns of young people.
Claudine Ganter, Regional Councilor for the Grand-Est region and Vice President of the Rhine Council, and Sylvia M. Felder, President of the Government of Karlsruhe, added to the discussions the vision of the German and French partners of the Upper Rhine. Both were able to analyse the results of the survey that were presented during the seminar that took place in February 2020 in Karlsruhe and Strasbourg and intentionally involved young people.

As a result of the events, among the promising areas of work for climate and the environment in the Upper Rhine region, we can mention:

Transport:
• Tax relief for frontier workers only in the event of sustainable mobility: individual road trips by car should no longer benefit from a tax reduction, only ecological trips (public transport, carpooling or cycling);
• Create a subscription package financially interesting for young people of the Upper Rhine for public transport or car-sharing subscription package financially interesting for young people => alternatives to stop using a personal car;
• Organise each month a car free Sunday in the 3 border countries. Recycling: offering an effective separate collection of waste and better harmonise the waste collection systems of the 3 border countries (common bin colors, harmonized symbols for key waste types).

Food: Creating a regional trinational food label (identification of sustainable food products from the Three Country region and financial support in this area)

The results of the survey conducted among young in the Upper Rhine region revealed that this population category strongly identifies with Europe and shows a strong interest in cross- border cooperation. The themes which attract their attention are the environment, mobility and training, which confirms the guidelines of the Upper Rhine Conference.

30 young participants took part in the Forum in Strasbourg and 60 in the one in Basel, for a total of 90 participants involved. The general feedback gathered from participants was that with these two events, young people felt more considered in trinational cooperation between border regions of France, Germany and Switzerland. Many have visions and concerns (see the survey). Their concrete proposals are taking into account the fact that climate change does not stop at the border and solutions have to be found involving the three border regions.

Participants urged policy-makers to follow their concrete proposals and implement them. All the stakeholders foreseen to attend the event did so. Representatives and decision-makers from the Upper Rhine Region, Regio Basiliensis, Grand East Region and government of Karlsruhe, Strasbourg Municipality, Mulhouse Municipality, Basel Municipality and Freiburg Municipality took part in the event. A lesson learnt was that these kinds of forums have a lot of participants when the organisers are local authorities, since they invite their peers.
On the contrary, it is more difficult to have such a high attendance level when the invitation is coming from youth organisations. Among the points to improve, it should be mentioned that the timing of events could be improved. Several months passed between the first and the second event, which made it difficult to follow up on concrete proposals in 3 different countries. At the time of writing, a third meeting has not yet been scheduled. This may mean that participants won’t be the same of those who attended in 2020, which could make it difficult to catch up. Furthermore, future meetings will be online due to Covid-19 restrictions.

A potential threat to the success of this experience is that the young people do not decide on the political agenda, which is still in the hands of policy-makers. Furthermore, the proposals made by the young people are very daring and go beyond what the usual environmental associations recommend, which makes one wonder whether policy makers will really follow these requests or rather feel too challenged.

Although there is room for improvement, we can say that the basis for a dialogue with young people in the Upper-Rhein region are set. The events revealed that the Climate Conference in France is seen as an example in Germany and Switzerland, so it could give a new impulse and be replicated at regional and cross border trinational level.